The walkthrough is based on the current TBP release 3.6.7 with the installed October 2005 campaign release 2.0 which can be considered to be the final one. All screenshots were made with highest detail setting, activated 2x anti aliasing (Launcher), activated 2x anisotropic filtering (RivaTuner) with Fraps. The resolution was 1024×768 but all shots have been resized with Microsoft PowerToy Image Resizer to 800×600 and converted to JPG-files (75% quality).
The difficulty of choice is “easy” making a mission restart necessary only for trying alternative solutions for ending the mission.


Screams from the dark 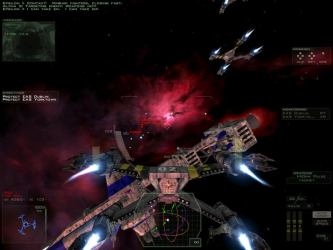 Once you are “in” fly towards the cruisers and take a position between them. Until one of your wingmen warns you that Minbari fighters could be en route there is nothing you can do. Don’t worry about the fighter which suffers from „previous damage“ and explodes, there is nothing you can do about it and this has no effect on the progress of the mission.
Soon the first wave of enemy fighters will arrive. Ordering one wing to take on a single fighter should minimize the amount of time needed to take one of them down. Sending these orders should not be a problem since the enemies are arriving far enough away.
When engaging the enemy yourself, you should pick a hostile which is not being chased by any other wingman (the number of red points right next to the „targeting frame“ indicates how many wingmen have targeted this ship). Since the Minbari fighters are faster than yours and highly maneuverable it might take a while to destroy or successfully hit one of them. A clever mixture of both afterburner-usage and 0-speed-turns (if you are faster your ship will make larger circles when turning than you do at a lower speed) can help you to get the Minbari into your firing arc.
Don’t aim for the fighter itself! To hit it you must fire for the small red circle in its flight direction – that’s where you are most likely to hit him at his present course and speed. This might cost you a lot of nerves when starting out but you’ll learn it one way or another.
Minbary cruisers arent very friendly… Once the first wave is eliminated send your wingmen the order to form up on you or send them to defend the cruisers. No matter what your choice you should return to the cruisers yourself to wait for the second wave which arrives soon. Again your first task is to eliminate as many fighters as soon as you can. The fire coming from the cruisers’ turrets might not hit a fighter very often, but it inflicts serious damage to the attackers once hit. 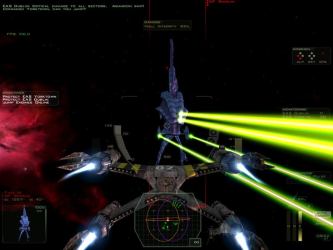 It´s crucial that the cruisers suffer as little damage as possible, success in this mission is unthinkable when one or both of the cruisers are destroyed!
After the destruction of the second wave the mission enters a critical phase. A Minbari warcruiser will arrive all of a sudden and will open fire on one of the cruisers. There is no difference between staying and watching the end of the attacked cruiser and engaging the Minbari because the latter option does not give you any advantage. If you attack the warcruiser with all wingmen directly and go to full speed in order to pass its defences, the cruiser’s answer is a massive salvo from its beam turrets which will make you loose much of your ship’s health and lead to high losses of wingmen.
You might be able to place yourself close to the target where you are out of the firing arc of its turrets, but the damage your weapons inflict in the short time the cruiser needs to destroy your cruiser and to jump out again is minimal. Shortly after this, the remaining cruiser is able to charge its hyperdrives making it possible to jump to safety once you receive the order to jump from Command… 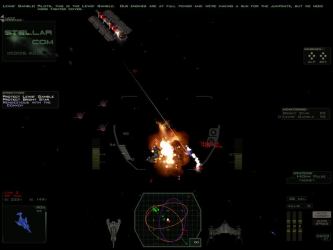 Enemy fighters aheadFirst you should form up with the convoy. Once the first enemies arrive, order your wingmen to “Engage Enemies” (standard is „c“ + „3“ + „9“) or order each wing to guard one of the freighters. The first solution works very well this time since the enemy fighters are arriving in small groups close to the convoy!
Try your best when taking out Minbari fighters. Sometimes one of the freighters may be disabled by Minbari gunfire. This is avoidable but don’t get upset if you are not able to prevent this – the mission will still be successful if only one of the freighters reaches the gate. The other one simply survives until the first freighter is gone. So try to stay near the disabled freighter and keep your wingmen close in order to defend it.
After several attacking wings have been destroyed a Minbari frigate will jump in. Concentrate your fire and your wingmen in order to engage the frigate, which will be attacked by the soon arriving EAS Kursk.
The warcruiser which arrives in the background and takes on and destroys the station cannot be stopped. Don’t worry about it.
Once you are near the ship - again you have to get very close if you don’t want to be destroyed by the ship’s weapons – you should transfer all power to your fighter’s weapons in order to maintain constant fire. Since you have no missiles, you will have to rely on you primary weapons which drain much of your energy.
Disabling the frigate by destroying its engines located at the „back triangle“ of the ship makes it easier to destroy its turrets and finally the ship itself.
Once the engines of the Tinashi are destroyed it is doomed. If you and your wingmen are good and are able to destroy many of the ship's turrets the Kursk may survive. This is not remarked at the Debriefing but gives you a good feeling.
Enemies below! Once the frigate’s hull drops to 5% you should retreat from the ship in order to avoid the blast from the ship’s exploding. Your wingmen and the Kursk will seal the frigate’s end..! At the end you only have to fly into the jump gate and jump out with reactivated jumpdrives. 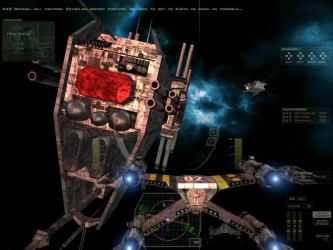 This mission is extremely static!
No matter what you do the mission’s procedure is always the same. Still, you should take the opportunity to score some kills. Order your wingmen to form around you right from the start.
Pass the Rommel and fly towards the blue nebula behind the dreadnaught and listen to your wingmen’s dialogue. Once it ends a group of Minbari scouts will arrive.
Order your wingmen to attack. With their help you should be able to destroy them fast.
After you turn the Minbari fighters into piles of floating junk a Minbari combat group will arrive. Again the Minbari capships outmatch you and your wingmen.
Since you can’t do anything about saving our own capital ships, you might as well take on the weakest of Minbari ships – a Tinashi-class frigate which you can destroy with the help of all your wingmen. 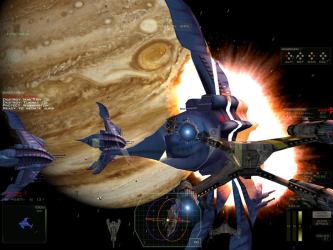 This is problematic since you have to avoid the Sharlin warcruisers and take serious damage from fighters and the frigate and will have problems returning to your own „fleet“.
Attacking and destroying a Sharlin is a difficult alternative and takes a very large amount of time. But this is rewarded by a great view when the warcruiser is destroyed

If you take too much time, the Minbari get in range to destroy the Washington and the Stockholm departs with the other fighters leaving you behind alone without any chance of succeeding this Mission!
You choose your behavior and that of your wingmen as you like.
Most important at the end is that you get your jump drives activated as fast as possible and jump out, because Minbari fighters will take on the Earth ships which were left behind and then there is no way out left for you…

Battle of the line 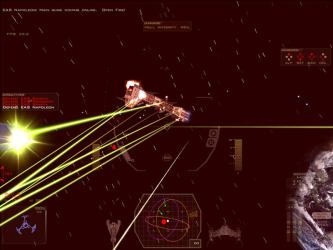 As in the previous mission this mission is extremely static and sad.
Your only goal in this mission is to survive the Minabri approach of Earth, hard as this might sound. Overwhelming enemy power! Although you have a large number of wingmen (as well as missiles!) you are not able to take on one of the three Sharlins which fly in tight formation because their laser-crossfire can destroy every of your wingmen and you within seconds!
Take care of yourself, group your wingmen around you and flee from the advancing Minbari. Take on incoming fighters but don’t get lured to warcruisers!
Once all of the Earth capships are destroyed you receive an order to regroup and the mission ends with a „red-alert“-screen…

Battle of the line Part 2 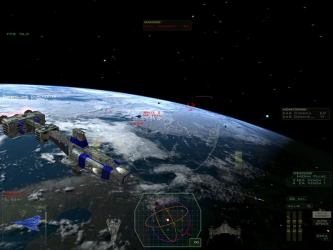 Arriving at lower Earth orbit you again have to engage the advancing Minbari.
You might not be able to accomplish much, but you can still score some kills.
Once the fighters are destroyed, retreat to the Dorchester and the Corsica and wait.
An assault on the Sharlins is futile and the other fighters are too far away to engage.
So your only option is to wait until the Minbari withdraw and surrender..!
Interesting, isn’t it?
If you don’t know the series, the question why the Minbari surrendered all of a sudden is unanswered..?
Fly to the Corsica and jump yourself with Alt + J [standard] to the higher orbit where this short campaign ends with a nice view of the saved earth…